The momentous Mabo case finally acknowledged the history of First Nations dispossession in Australia, abolished the legal fiction of ‘terra nullius’, and altered the foundation of Australian land law.

The momentous Mabo case finally acknowledged the history of First Nations dispossession in Australia, abolished the legal fiction of 'terra nullius', and altered the foundation of Australian land law.

Terra nullius is a Latin term meaning ‘land belonging to no-one’. British colonisation and subsequent Australian land laws were established on the claim that Australia was terra nullius, justifying acquisition by British occupation without treaty or payment. This effectively denied First Nations Peoples’ prior occupation of and connection to the land.

In the 1971 Gove land rights case, Justice Blackburn ruled that Australia was terra nullius prior to European settlement. This judgement was unsuccessfully challenged by subsequent cases in 1977, 1979 and 1982. However, on 20 May 1982, Eddie Koiki Mabo along with four other Meriam People began their legal claim for ownership of their ancestral lands on the island of Mer in the Torres Strait.

Mabo and his companions claimed that Meriam People had:

On these grounds, the Mabo case sought recognition of Meriam People’s rights to this land.

The case was heard over 10 years, progressing from the Queensland Supreme Court to the High Court of Australia. On 3 June 1992, the High Court ruled by a majority of six to one that Meriam People were “entitled as against the whole world to possession, occupation, use and enjoyment of (most of) the lands of the Murray Islands”.

Three of the plaintiffs didn’t live to hear this ruling, including Eddie Mabo, who passed away just months before the decision was handed down.

The High Court’s judgement in the Mabo case resulted in the introduction of the doctrine of native title into Australian law, removing the myth of terra nullius and establishing a legal framework for native title claims by Aboriginal and Torres Strait Islander people in Australia. The judgement ruled that the common law as it existed:

The momentous Mabo case finally acknowledged the history of First Nations dispossession in Australia, abolished the legal fiction of terra nullius, and altered the foundation of Australian land law.

Eddie Koiki Mabo was born on the 29 June 1936 in the community of Las on the island of Mer (also known as Murray Island) in the Torres Strait. Eddie was raised by his Uncle, Benny Mabo, following the death of his mother during childbirth.

At age 16 Eddie was exiled from Mer for breaking customary law. He moved to mainland Queensland, where he worked at various jobs, including deckhand, cane cutter and railway labourer.

In 1959, aged 23, Eddie married Bonita Nehow and they eventually settled in Townsville, Queensland, where they raised 10 children.

In 1974, while Eddie was working as a groundskeeper at James Cook University, he discovered during a discussion with Henry Reynolds that what Eddie regarded as his People’s land was actually owned by the Australian Government. This discovery inspired Eddie to challenge Australian land ownership laws.

At a land rights conference in 1981, a lawyer suggested there should be a test case to claim land rights through the court system. Five Meriam People, Eddie Koiki Mabo, Sam Passi, Father Dave Passi, James Rice and Celuia Mapo Salee, decided to challenge for land rights in the High Court.  [4]

In May 1982, led by Eddie Mabo, they began their legal claim for ownership of their lands. 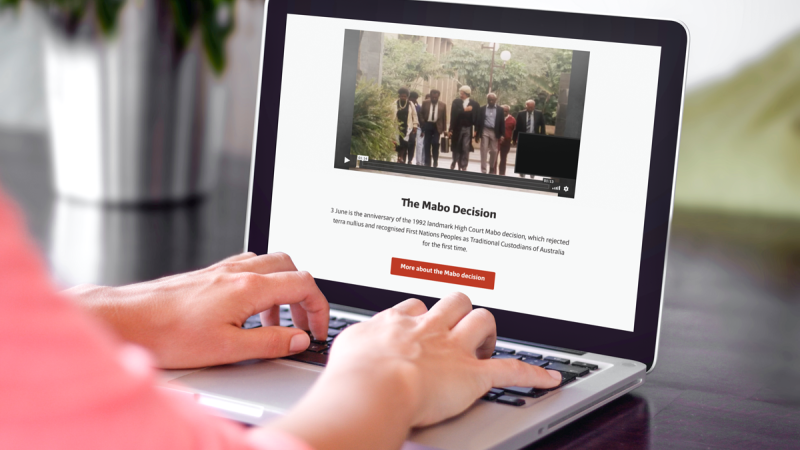 Having read ‘Mabo and Native Title’ (741 words) and watched The Mabo Decision (01:14), as a class discuss the ‘Stop and think’ questions. Then, in your notebook or on your laptop, write a brief imagined interview with Eddie Mabo asking why it was so important to pursue this land rights case. Try to capture how you think he might have responded.​

Imagine how you’d feel if someone took something very important and valuable from you. What if they told everyone it didn’t belong to you in the first place, so they were allowed to take it? What if that same person was in a position of power over you, so you were powerless to do anything about it? How do you think you’d feel if, a long time later, the truth was finally revealed? How important is it that our nation’s values, laws and historical stories reflect the truth?

The Mabo verdict was a watershed moment for Australian law, politics and history. The subsequent apology by Prime Minister Kevin Rudd further reinforced the reality of this ruling and what it meant for the shared story of our nation. However, while our understanding as a nation of the fact that the British didn’t arrive to vacant land has improved, this hasn’t made much difference to the day-to-day reality of most First Nations people.

What was it and what did it achieve?

In a remote part of Australia, at a time before social media and internet was around, one Gurindji man was able to stand up, be heard and change the course of our nation’s history.